Executive and Management Franchises & UK Professional Business Opportunities For Sale
www.WhitecollarFranchise.co.uk founder, Nick Tubb explores the background behind the website, and how white collar franchising was a 'secret' world. Could you follow in the footsteps of others before you who have taken control of their own destiny and invested in a white collar franchise?

With Dublcheck you can build a business turnover of half a million pounds a year. The opportunities are unlimited.

Starting a Franchise - “There’s more to franchising than fast food and coffee!”

“There’s more to franchising than fast food and coffee!”

Writes Nick Tubb, founder and Managing Director of www.WhiteCollarFranchise.co.uk, part of the TotalFranchise Group of Websites

For the frustrated executive, franchising can offer a wide range of professional business-to-business opportunities that can utilise your business skills and all your experience harnessed with a proven and profitable business model so you can succeed in self-employment. 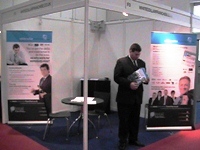 Back in 2006, before the White Collar Franchise website launched with a bang at the Executive Recruitment Exhibition and Conference, I had been, for the previous six years or so, employed by two of the leading management consultancy franchises, that both still dominate the sector today. Most days, in my role as franchise recruitment manager, I would meet with a wonderful array of prospective franchisees, exploring the franchise market place to determine whether that business, or franchising at all, was the next step for them.

They would all have come from contrasting career paths – TV producers, senior directors of major PLCs, health professionals, business sector experts, and other occasional weird and wonderful roles in industries I had previously never heard of! I recall listening to the stories of their working lives to bring them to where they were at that time as a fond memory, as some people had some quite staggering experiences and were quite the source of inspiration. Of course, it also gave me a good chance to learn enough about them so that I could shape the features and benefits of the franchise to focus on the keys aspects that would, I hoped, ignite their interest in the franchise when it was my turn to do the talking.

I always thought it was interesting though, that no matter what the background or experience, there were two common factors that people exclaimed when I met them.

The first, was with regard to franchising itself, the vast majority never knew it existed in ‘white collar’ business models. Most were aware of major fast food and coffee chains as something they may have linked to franchising, but other than that, very few had an awareness in much depth beyond that. Most described ‘stumbling’ upon franchising when exploring career options with comments like “a friend mentioned…..”, “an old colleague started his own business a few years back and I saw them the other day and they explained it was a franchise….”, “I noticed a section for franchises in the jobs section in the paper” – in short, most of the prime candidates for a white collar franchise have a blinkered focus on the jobs sector and simply aren’t aware there are other options out there.

The second comment was equally frequent. Having discovered franchising, and started to explore the myriad of opportunities that exist once one has cracked the shell and found a way into this ‘secret’ industry, people often said a very similar comment “I know what I don’t want to do”.

With so many business sectors from wheelie bin cleaning to dog washing, retail to cleaning, estate agency to business consultancy, those people I had met knew they wanted an opportunity that enabled them to use their business experience, industry knowledge and professional skills in a business to business environment. “I’m not looking to flip burgers” was a typical light-hearted remark to highlight their point, repeated surprisingly often, though of course you laugh as though it’s the first time you’ve heard such a pearl of wit.

They often sought a better work-life balance, or the opportunity to replicate or exceed the earning levels they had been used to, but without the corporate politics or the long commute and these were typically the benefits offered by the franchises in this sector with the usual caveats of ‘following the system’ and ‘hard work’. 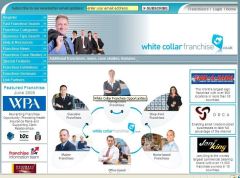 And so, with a massive market of prospective white collar franchisees, who are looking for something that a franchise can provide, but just haven’t discovered it yet, all those experiences were directed into the creation of www.whitecollarfranchise.co.uk, a website that sought to provide a better depth of information about a sector of franchises that would appeal perfectly to some people. Such a website would not need hundreds of franchises competing for space and flashy logos to draw attention, but simply provide sector targeted content and franchises, that we could also market externally of the franchise industry, to draw people who would be suited to or looking for management or executive franchises, matching the right franchisors with the right prospective franchisees. Simple. And it worked.

Now, seven years on, WhiteCollarFranchise has helped hundreds of people to enter franchising with dozens of professional, business to business, executive and management franchises showcased on their sites. Franchising certainly does offer more than fast food and coffee, so you could follow in the footsteps of others before you who have taken control of their own destiny and invested in a white collar franchise.

Visit the WhiteCollarFranchise website to see the range of franchises available in this buoyant sector.

The secret to running a successful franchise.

Franchisee Lee Eaton, winnner of the 2015 BFA Franchisee of the Year Award, shares the secret to running a successful franchise.

What is the difference between a franchise and a licence?

Here we take a close look at the difference between a franchise and a licence, and what they may offer the entrepreneur.

There are some franchises that do not necessarily require experience and qualifications in the world of accounting.

Invest in a business that offers excellent financial rewards

Gary Farrer, Managing Director of SureCare talks about why investing in a business can offer excellent financial rewards.

Franchise your way to international success

Hear from Ben Kirby of the InXpress Franchise as he talks about funding a successful franchise and why franchising is the best way to open a business .

Escape Corporate Life and take control of your career

The World Of Business Coaching

Executive Franchises In The Retail Business

The Types Of Franchise Ownership

Can I remain employed whilst building my own business?

Advantages And Disadvantages Of Franchising

How to franchise a business

Business Information - How to find the right Accountancy Franchise for you.

Buy a Franchise - WhiteCollarFranchise.co.uk explains why

Whitecollarfranchise.co.uk has been providing information on executive and management franchises since 2007.