Jon and his wife Sarah were both experienced in sales when they started looking for an opportunity to run their own franchise in Belfast. 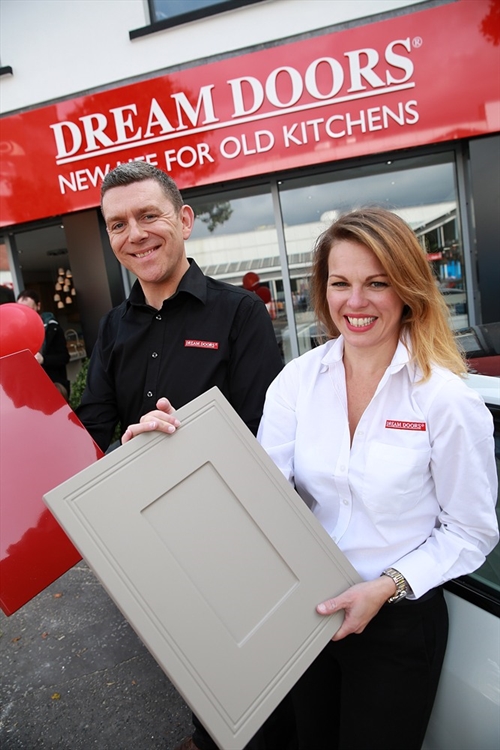 They wanted to take full control of their earning potential but, for Jon, there was an added incentive – being his own boss for the first time.  He found the freedom he was looking for running his own franchised showroom for the UK’s #1 kitchen makeover company.

"The two main reasons for joining Dream Doors was the support you get from the start, but the other was that I really disliked working for other people.  I really don’t like being told what to do but I did want to do something that draws on my sales background, something that is both customer-focused and customer-facing.  I know that’s where my skill set lies, and it was important to me to do something that has almost unlimited earning potential.

I was looking for something that had no ceiling on what you can do and achieve. Some franchises have real limits, but Dream Doors seems not to - you get back from it what you put in."

Jon and Sarah opened Dream Doors Belfast four years ago and are often among the highest earners in the national network.

Jon had previously been an area manager for a bed retailer with over 20 years’ prior experience in sales roles, some of which were in the franchise industry. Sarah was already a full-time mum and also had sales experience – although most Dream Doors’ franchisees do not.

"We decided to make the change and go into franchising because we had always wanted to run our own business. Before working in retail management, I had spent some time working in franchises, so I was very familiar with it. I’ve always liked the concept and the idea behind franchising, but I hadn’t worked in kitchens before. Joining Dream Doors was a way of getting into a growing business but with strong support and backing.

The first few years are very hard work – whatever your background, there will be areas of the business you don’t know. For example, I not only had to learn about the kitchen industry, I also had to learn about doing PAYE and VAT, but that’s all part of the fun of the challenge."

Dream Doors is looking for more talented franchisees like Jon and Sarah who are ready to generate huge profits by representing an industry-leading brand.

Find out more about Dream Doors franchise opportunities by clicking below

It took Wilson Craig just 31 days to formally open his kitchen showroom in his hometown of Prestwick.

Ex-banker Jerry Innesbeer took back control of his working life by taking on a Dream Doors franchise after being made redundant.