After working in the banking sector since the early 80s, Jerry Innesbeer was looking for a worthwhile investment for his settlement cheque.  He chose a Dream Doors kitchen showroom franchise for the opportunity to earn great money while building a business he could call his own. 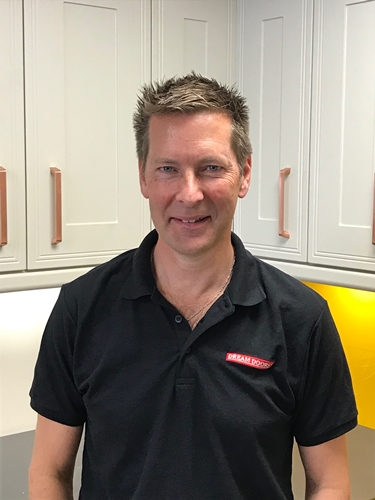 "When I found out I was losing my job, I put a corkboard up in my kitchen.  Every time I had an idea of something I really wanted to do, I would put a note on the board.  I started looking at it as: 'I have an opportunity here to do whatever I want'.  I was going through the board one day and talking to a friend who was also being made redundant and had taken on a franchise.  I thought: 'I could do that too'."

Jerry attended a franchise exhibition and spoke to Dream Doors’ Director of Franchise Recruitment, Alex Waite, about opportunities with the company.  Jerry said that when he heard about the Dream Doors model he felt he could 'buy into it' and saw that the market was buying into it too.

So what advice would he offer to anyone currently facing redundancy or considering a career change?

"I think the biggest thing for me was to keep reminding myself that it’s not a worrying time.  It’s not: 'Oh god, I’m losing my job' - it’s an opportunity.  Someone’s giving you a big cheque – what do you do with it?  For me I wanted to do something more interesting – I’d served my time in banking and didn’t want to go back into that.

With Dream Doors, I liked what they had to say, I liked the concept.  There was clearly a great level of support behind you.  I was not really ready to jump out and do something completely on my own.  This was a good way of running my own business and having the support network at the same time."

It took Wilson Craig just 31 days to formally open his kitchen showroom in his hometown of Prestwick.

For Jon O’Hara opening the first Dream Doors showroom in Northern Ireland was also about finding the working freedom he was seeking.