Executive and Management Franchises & UK Professional Business Opportunities For Sale
All Franchise Categories  »  Home Services Franchises  »  Aspray  »  Casestudies
Aspray Case Study
Director of Aspray Luton, Barry Thurston, hosted a very successful launch event for the opening of his new local business. We spoke to Barry about how he achieved a successful launch event and how it helped kick start his business.

Barry Thurston - How to successfully launch your Aspray business!

Director of Aspray Luton, Barry Thurston, hosted a very successful launch event for the opening of his new local business at the fine foods venue, Harper’s Food in the Oak Lounge. 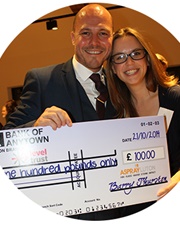 The event attendees included a range of guests which included the Mayor of Luton and local business people. The packed venue accommodated 73 guests, all supporting 2 great local charities; the Level Trust and Relay for Life.

We spoke to Barry about how he achieved a successful launch event and how it helped kick start his business.

Barry simply said "every single person I invited, I met face to face". In the build up to the launch of Aspray Luton, Barry attended lots of networking groups and made sure that everyone was aware of the up and coming launch event, he also said – "I didn’t shut up about it". During the networking groups Barry encouraged some healthy competition by challenging everyone in the room to bring along 2 or 3 guests, "Cheeky, but it worked!" said Barry. Barry focused largely on the FREE networking aspect of the launch event, as most networking events normally come at a cost to the networkers who attend.

Barry wanted to create a sense of excitement around the launch of Aspray Luton, and what other way is there to do that than offering free refreshments. In addition to this, each attendee benefited from a champagne reception with a selection of canapés. What more could you want on a Wednesday night after work?

The excitement didn’t stop there. A lady approached Barry at the launch event, asking whether he could deal with an escape of water claim for her mother. This gave Aspray Luton a kick start to business with a £4,000 claim before his launch event had even finished.

Encouraging attendees to show up to your launch event can be time consuming! Barry personally invited 450 people and followed up with an email every 10 days or so to remind them, highlighting the free networking opportunity. Barry explained that "the launch event should really engulf your first few weeks with Aspray" concentrating on getting those "bums on seats". Of the 90 people who confirmed their attendance, 73 people attended.

Is cold calling an effective method of inviting?

Barry’s answer is, "In a word, no. Around the time of my launch event, my wife’s friend had just been made redundant from a telesales role so I asked if I could make use of her skills for a day to ring round possible attendees. She went through a long list of numbers and not one person turned up on the night". This shows that Aspray service is best sold face to face. "My advice to prospective and new franchisees is network, network, network!".

Colin also plays a very important role within the Aspray network, offering mentoring and speaking to interested candidates on his experiences as an Aspray franchisee.

My First Year as a Project Management Franchisee…

George Cusack became a project management franchisee with Aspray in November 2018. After a long and successful career in the motor trade working in various management roles, George wanted to work for himself.

The Person Behind Aspray Sunderland

From Approved Contractor To Aspray Franchisee

Jack Connor was an approved contractor for Aspray and he is now a successful Aspray franchisee himself.

Clive and Nathalie Hawkesley joined the Aspray network in September 2013.

I have loved every minute of my journey since joining the network and I can honestly say that my investment has been worth every penny! I'm looking forward to growing my business with the help of the team from Director down and can't wait to see what the next 12 months hold.Phil Reynolds

The whole Aspray Management team are amazing & I have found the value of the franchise fee to be worth every penny. If you are hardworking, committed and prepared to put in the hours and apply the advice given to make your business work then Aspray will support and nurture you every step of the way.Jaynie Ross